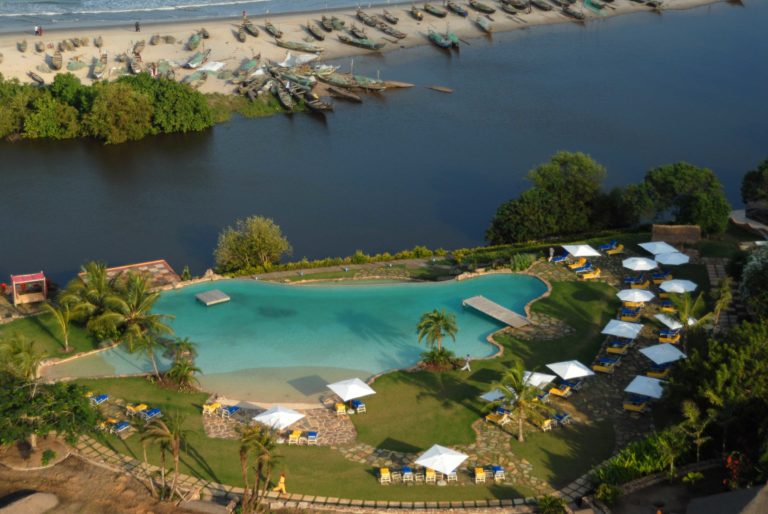 On the West African coast of Ghana, the White Sands Beach Resort and Spa combines luxury and exclusivity, in a delightful, exotic, understated manner, while the resort with 10 well appointed individually designed suites & chalets is situated amidst 60 hectares of tropical garden with exotic plants & trees brought in 9 different countries with its private beach, club house, restaurants & bars, tennis court, and helipad.

While the beach club is separated from the resort by the village of Gomoa Fetteh on the one side and the exuberant lively fishermen on the other, tucked snuggly between the ocean and the bird sanctuary of the Kako Lagoon. The White sands Beach Resort and Spa offers friendly form duly blended with African charm, culture and tradition.

In this magical spot care was taken to preserve and include the beauty of the natural environment in the planning and execution of this luxurious resort. It took seven years to create, conceive and complete this magnificent piece of paradise where each architectural design, detail speaks to the senses, warm earthly colors, smooth surfaces, rich textures, subtle fragrances, and create sensuous aesthetics.

At White Sands Beach Resort and Spa we offer guests new culinary experiences that are exotic yet familiar. Our cuisine embraces flavours from countries around the tropical belt to the Mediterranean.

The success of White Sands is the people who make it happen. We had staff from eight countries contributing their tradition to enhance the comfort of our guests. We emphasizes on seclusion in this tropical yet undiscovered lavish sanctuary where it offers to a selected few a special blend of emotional comfort known as the White Sands experience. Here at White Sands one is far from Television set, telephone system and other media materials.

White Sands is located less than hour’s drive from the city of Accra, in the heart of the central region at Gomoa Fetteh, once the strong hold of British administration and home to many forts & castles such as Elmina, Fort St Jago, Fort Good Hope & Cape Coast Castle – World Heritage Monuments restored and recognized by UNESCO. Amongst other attractions is the untouched rain forest at Kakum, the only one of its kind in West Africa, with its lush vegetation and wide array of fauna, flora & wildlife, with its tree top canopy walkway, a must to visitors. Many exciting festivals, Bakatue the start of the fishing season, Aboakyer celebrates the Game Hunts & Edina Buronya the native version of Christmas amongst others will leave the spectators overwhelmed. The regions fishing villages, historic towns as well as its undisturbed palm fringed beaches are all within the vicinity of Whitesands.

The closest landmark to the centre of the world

Ghana is located on the west coast of Africa, about 750 km longitude 311 West and 111 East. It is bounded on the North by Burkina Faso, on the West by La Cote d’Ivoire, on the East by Togo and on the South by the Gulf of Guinea (Atlantic Ocean). Tema, the industrial city, which is adjunct to Accra, the capital of Ghana, is on the Greenwich Meridian (zero line of longitude) making Ghana the closest landmark to the centre of the world. Ghana has a total land area of 238,537 km2 (92100 square miles, 23 million hectares) stretching 672 km North to South and 357 km East to West. Its physical size makes it about the same size as Great Britain. Out of the total land area, 13 million hectares (57%) is suitable for agricultural production, out of which 5.3 million hectares (39%) is under cultivation.

Ghana has a tropical climate. The temperature is generally between 21-32C (70-90 F). There are two rainy seasons – from March to July, and from September to October, separated by a short cool dry season in August and a relatively long dry season in the South from mid October to March. The North is dry, and falls partly within the Sahelian zone. Ghana is not a mountainous country, but there are some highlands and some steep escarpments in the middle portions and isolated places in the Northern parts. The land is relatively flat and the altitude is generally below 500m – with more than half the country below 200m. The Volta river basin dominates the country’s river system and includes the 8,480 km2 Lake Volta – the largest artificial lake in the world.

Ghana practises a multiparty parliamentary democracy based on a Constitution. This Fourth Republican Constitution – which came into force in 1992 – provides for a unitary state governed by a President and Cabinet and a unicameral National Assembly. National Assembly entrenches the separation of powers and offers appropriate checks, serving for a maximum of two terms. Parliament comprises a 230 seat National Assembly which has a 4 year term. The Supreme Court is at the apex of Ghana’s judicial system, headed by the Chief Justice. The legal system is based on the English Common Law, where the courts are bound to develop the notions of fairness to the individual. The Constitution also makes provision for continued recognition of traditional chiefs and customary law.

There are 56 Ghanaian dialects, of which Akan, Dangbe, Ewe, Kasem, Gonja Dagare, Ga, Daghani and Nzema are the major languages. The official languages of the country are English, but French and Hause are two major foreign languages spoken in the country. Ghana’s Constitution guarantees freedom of religion. The 2002 Population Census indicates that Christianity, Islam and Traditional Religion are the major faiths practised in Ghana with the following representation: Christianity 68.8%, Islam 15.9% and Traditional Religion 8.5%. A significant proportion (6.1%) has no religious affiliation. Ghana’s population is estimated at about 18.9 million and grows at 27% annually. Most of the population is concentrated in the Southern part of the country with the highest density occurring in urban and cocoa producing areas.

Rich in mineral resources such as gold, diamonds, manganese, oil, limestone, bauxite, iron ore as well as various clays and granite deposits. In 2010 Ghana produced 3,100.000 ounces of gold, worth USD3988 billion and 308,679 carats of diamonds, worth USD 1113 million. Ghana is the second largest producer of gold in Africa. Extensive forests which are arguably the best managed in Africa (with 252 permanent forest reserves in the rain forest zone alone, in total about 11% of Ghana is defined as forest) Ghana is the seconds largest producer of timber and the seconds largest exporter of wood and wood products in Africa. Ghana’s rich marine fishing resources include tuna and game fish. Beautiful landscapes, inviting sunshine, pristine beaches, exotic wildlife and exciting national parks and game reserves. Rich culture and tradition and a world acclaimed warmth and hospitality of its people.